The Excellence of Prayer 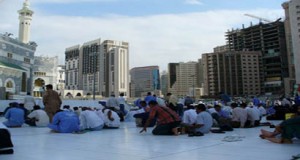 The Prayer has a great status in Islam; a status which no other act of worship holds.

The Prayer is the first pillar of Islam that the Prophet (peace be upon him) mentioned after that of uttering the Testimony of Faith, by which one becomes a Muslim. It is a form of worship consisting of specific statements and actions. It begins by pronouncing the Greatness of Allah (Allahu Akbar), and is concluded with salutations (As-Salamu `alaykum wa rahmatullah).

The Prayer was the only order that was commanded by Allah directly to His Messenger  during his night journey. Allah says what means:

Exalted is He who took His slave (i.e. Prophet Muhammad) by night from Al-Masjid Al-Haraam to Al-Masjid Al-Aqsa, whose surroundings We have blessed, to show him of Our signs. Indeed, He is the Hearing, the Seeing.(Al-Israa’17:1)

Prayer was also obligatory upon all the prophets (peace be upon them all) and their nations. Additionally, it was the first act of worship that was made obligatory by Allah on every believer.

The Status and Virtue of the Prayer

The Prayer has a great status in Islam; a status which no other act of worship holds. It is the spinal cord of the religion, without which the religion itself cannot be established. The Prophet said regarding it: “The head of the matter is Islam, its spinal cord is the prayer, and its highest pinnacle is ‘Jihad’ in the way of Allah.” (Muslim)

In the Qur’an, Allah ordains us hundreds of times to establish the Prayer. Allah says what means:

Indeed, prayer has been decreed upon the believers a decree of specified times.(An-Nisaa’:103)

Establish the Prayer, and give Zakah (poor-due) and bow with those who bow (in worship and obedience)(Al-Baqarah 2:43)

The Prophet said: “Islam is built upon five pillars: Bearing witness that none is worthy of worship but Allah and that Prophet Muhammad(peace be upon him) is His Messenger, establishing the Prayer, paying Zakah, observing Fast in Ramadan and performing Hajj.”(Al-Bukhari and Muslim)

The significance of Prayer is so great that one is ordered to observe it whether traveling or not, in safety or in fear. Allah says what means:

Be guardians of your prayers, and of the midmost prayer, and stand up with devotion to Allah. And if you go in fear, then (pray) standing or on horseback. And when you are again in safety, remember Allah, as He has taught you that which (heretofore) you knew not. (Al-Baqarah 2:238-239)(Al-Baqarah 2:238-239)

The Prayer is the best and most noble of deeds. It is the link between the believer and his Lord. Through the Prayer, the slave communicates with his Lord five times a day. To demonstrate the greatness and virtues of performing prayer, the Prophet said: “If the time for a prescribed prayer comes, and a Muslim performs ablution properly, (and then offers his prayer) with humbleness and bowing (to Allah), it will be an expiation for his past sins, so long as he has not committed a major sin; and this is applicable to all times.” (Muslim)

The Messenger of Allah beautifully gave a similitude, to the one who performs the Prayer in the prescribed manner and time, by these great words: “The five daily prayers are like a deep river flowing by the door of any of you, in which he bathes five times every day.” (Muslim)

The Prayer is the last thing that the Prophet reminded his nation with before he  died, saying: Guard your Prayer, guard your prayer and fear Allah regarding what your right hand possesses (i.e. slaves).” (Ahmad)

The Impact of Prayer

The spirit of the Prayer should be sincerity, devotion and contemplation. It is meant to strengthen the faith, purify and chasten the soul, qualify the believer for salvation in this life and the Hereafter and to make him shun immorality and evil deeds. Allah says what means:

Recite [O Muhammad] what has been revealed to you of the Book and establish the Prayer. Indeed, prayer prohibits immorality and wrongdoing, and the remembrance of Allah is greater. And Allah knows that which you do.(Al-`Ankabut 29:45)

Moreover, its aim is to generate within the subliminal self of man such spiritual power, light of faith and awareness of Allah as can enable him to strive successfully against all kinds of evils and temptations and remain steadfast at times of trial and adversity. The Prayer is so effective and soothing to the heart that the Prophet would resort to it whenever anything grieved him and would say to Bilal O Bilal! Comfort our hearts with it (i.e. call Iqamah for Prayer).”(Ahmad)

The overall effect that the properly performed prayers should have upon humans is described in many verses of the Qur’an such as:

Indeed, mankind was created anxious. When evil touches him, impatient, and when good touches him, with holding [of it], except the observers of prayer —those who are constant in their prayer.(Al-Ma`arij 70:19-23)

Purification in Islam and Hinduism (2/4)

Hindu Yoga and the Five Prayers in Islam (3/3)

Hindu Yoga and the Five Prayers in Islam (1/3)

Purification in Islam and Hinduism (1/4)

Hindu Yoga and the Five Prayers in Islam (2/3)