quarantine or lockdowns in many countries around the world. This epidemic has exposed the worst aspect in human soul in terms of moral endemic and behavioral decline, due to the fear and shock that prevails in the world.

Losses after Coronavirus or COVID-19

What will be the corona’s death toll? What will be after the collapse of international companies and the bankruptcy of governments? How long will it take to return to the normal? How much will be the unemployment rate? The answers for these questions are unknown, but we are sure that the losses will be large and long-term. Under the current circumstances it has been revealed that selfishness, self-interest, greed, miserliness, self-love and denial of others remained visible when the supermarkets, Wal-Mart’s shelves got empty.  The impacts of moral declination and selfishness are more dangerous than the epidemic itself for the individual, society and nations.

Test for Ethics in Pandemic of Coronavirus

Greed, stinginess, miserliness, self-love, denial of the other, forgetting of virtuous morals, mean behaviors, these immoral viruses remained hidden in human souls and inactive in the essence of the people until the Coronavirus pandemic surfaced over the scene that caused these moral diseases to show their symptoms clearly.

Community members were careless of the collapse of the moral values among the individuals and groups, but suddenly they woke up when the crisis worsened, shelves in stores became empty instantly, who could swiftly to collect multiple items has collected them without any consideration of others and their needs. Basic goods, necessary items were gone, and greedy merchants have monopolized the goods and raised their prices. Heads of states and governments appealed to people not to be anxious and terrified reassuring that the necessary materials are available and people should not worry, but people did not listen to them because the moral instincts have died and the behavioral foundation have collapsed a long time ago, when the individual and society did not feel the importance of ethics, and they may now feel the need for ethics more than their need to find medicine and drug for the recent pandemic Coronavirus or COVID-19.

Spirit of Cooperation in Adversity

There is no need to mention the related texts extensively here. It is sufficient to point out some important points. It is necessary to acknowledge that this epidemic has reminded the people all over the world of their fragility and weakness: rulers and ruled, presidents and subordinates, the governor and the governed, rich and poor, all are equal before nature, before the general epidemic or before the Divine judiciary and destiny, you may own money, deposits, and possessions but you are only a partner in the sources of life; you are not alone to own them.

The spirit of cooperation and assistance is one of the principles implanted in the human creation, which is the dominant nature of the normal and healthy human in any country in the world. Harming others purposely is a rare and an exception from this general habit, and wherever it is found it is a sign of psychological illness and moral disease as we have seen in some videos that a person with coughing symptoms began coughing purposely on the handle of shopping trolleys one after another with the intention of polluting others when they will hold the handle. This incident does not represent the general character in human at all, Yes, anomaly may occur from an abnormal person anywhere in the world.

Ethics when Shopping During Pandemic

Remember that people need the same things that you need, and people hold their lives dear, just as your life is dear, and their family and children are dear to them, just as your family and children are dear to you. Do not fill the cart with extra numbers of items especially during the natural epidemics or pandemics. Do not buy multiple or double items and remember the needs of others.  Do not buy more than you really need out of fear, do not be selfish, be merciful, fair, helpful, supportive, cooperative and kind, be brave and do not be a coward and fearful. 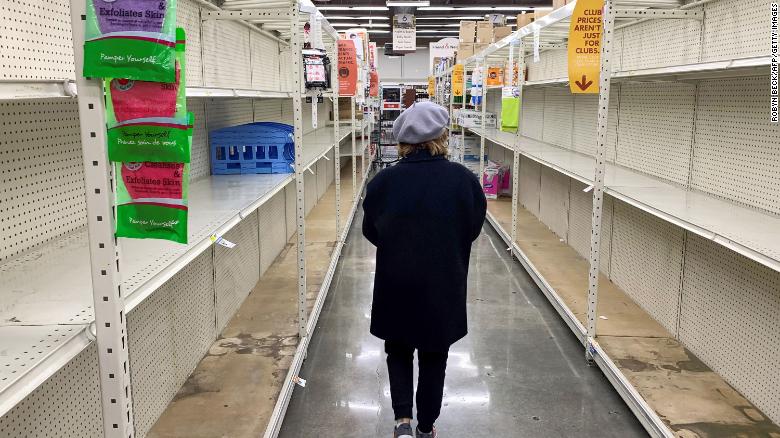 Do you want all people in this world to die and you should live alone? This world is beautiful for you because of others, imagine yourself alone in this world, imagine how stranger and how alien you are in this world, how weird you are and how much anxious your sense of loneliness, isolation and fear will be without others. People are a source of adornment for you and a source of pleasure for you even if you do not feel that when you are surrounded by them.

Lend a Helping Hand to those around You

Being a human being requires you to extend a helping hand to those around you who are members of your society, remember, the members of society are not equal in money, wealth, prestige and position, among them, there are poor and rich, a working person and a jobless, but they are helpful for you and for each other and you are benefited by their services over all.

“People, whether they are from the city or from the villages or countryside, everyone is a servant to other even if they do not realize it.”

For example: The farmer is a servant to you, he serves you by planting, sowing and harvesting and providing food for you, and you are a servant to him and serve him with your money and wealth when you buy food materials from him.

Be Reasonable and do not be Foolish:

At the time of epidemics or abnormal conditions, some people pretend to be brave and do not care about infection of Coronavirus, this is a stupidity and foolishness and may lead to destroy himself and others, but remember, if he causes any harm to himself or others he will be responsible for that. For example if his recklessness and foolishness lead to contract the virus or spread the infection, know that he will bear his sin and the sin of everyone who will be infected because of him even the number reaches a thousand. Everyone has to listen to the health and epidemiologists involved; now everyone has to maintain social distance and should stay at home.

We can advise those foolish people, wait and be patient now, perhaps, if you survive this pandemic you may get another opportunity to show your courage and bravery. However, now you need to use your logic more than your bravery. This is a serious and tough time and you need to listen to people of specialization and medical expertise.

(Altruism) Preference of Other over his Own Need

In Islam there is a great moral value, which is called Ithaar (or altruism), which is to prefer the need of others over the need of one’s own self, and giving the other the thing that he own self needs more.

Itahr, or selflessness, is one of the noble qualities emphasized in Islam. One who is selfless places concern for others above concern for himself. The selfless person is generous with his time and freely lends aid and support to others.

The Prophet (peace and blessings be upon him) reminded the believers of the noble quality of selflessness when he said:

(Altruism) Or Ithaar in Qur’an

(and give them preference over themselves, even though they were in need of that. And whosoever is saved from his own covetousness, such are they who will be the successful.) (Al-Hashr 59:9)

The Prophet Muhammad Example of Altruism

The most important results:

First: Good manners and noble behavior are a dividing line between human and animal.

Second: Good ethic is a habit and an instinct rooted in the human soul, and it has manifestations in deeds, actions and words.

Third: The moral instinct in a person is affected by companionship and friendship, and it can tend to good and bad, so a person should maintain and observe whom he accompanies.

Fifth: Translating noble moral values ​​into good deeds and actions is praiseworthy all the time and in times of crises, epidemics and disasters is more praiseworthy and important.

Sexuality in Islam and Hinduism (1/4)

Sexuality in Islam and Hinduism (2/4)

Ghunghat Or Hijab in Hinduism and Islam

Does Islam Give Women Freedom?